– Heroic Deeds, No One Needs 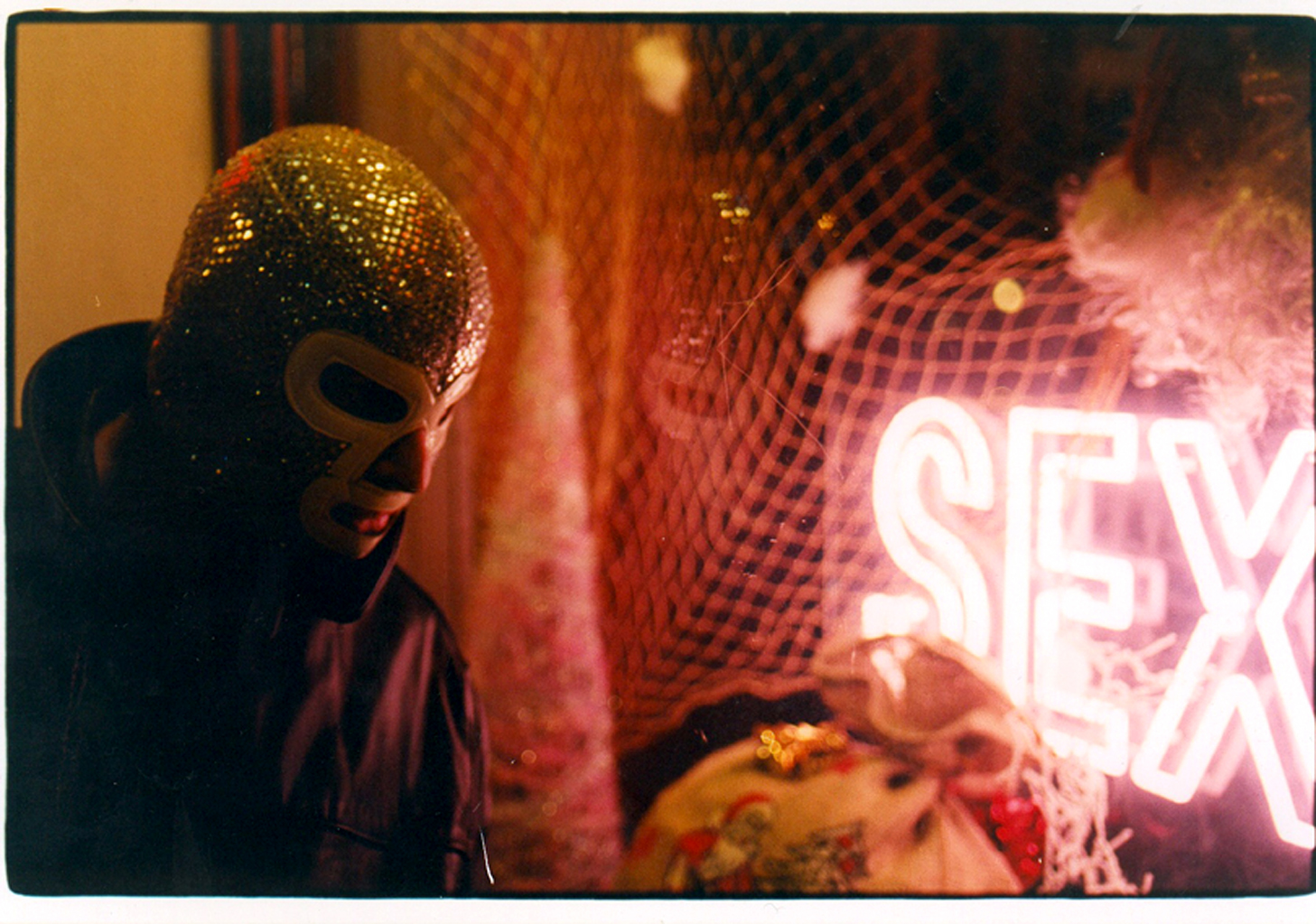 Caught between night and day, between past and no future.
Encountering creatures like himself, the dwarf, the cowboy, a dead pig, Santos pretends that there still are heroes in this forgotten world.
Struggling with no one Santos carries out heroic deeds that no one needs.
But Santos fell to earth bereft of his supernatural powers.
And with it he lost his reason to exist.

“Santos – Heroic deeds – no one needs”
a conversation with Uli M Schueppel about the film at  “Wohnzimmer”, Berlin, 19th October 2005

HOW WAS IT AT ALL POSSIBLE TO MAKE A FILM SUCH AS “HEROIC DEEDS – NO ONE NEEDS”?

The actual shooting phase of “Santos…” took place sporadically from winter 2000 until 2003. As soon as the moment was perfect, the night right or the morning ideal, the mask and a camera at hand, Ben Becker and Peppi Streich would start acting. As if they played music together. From 2003 to 2005, in the same sporadic manner, I buried myself in the work of conception, dramatic structure and montage of the altogether 46- hour long mini DV material. Secretly, it seemed to me as if we never really intended to publish the material – never really to hand it over to someone else. ‘How far can we actually go as regards privacy?’ I was thinking later. And ‘Is this really anyone else’s business at all? Does anyone want and will anyone be able to understand this? And who of us could determine the moment – as concerns the shooting as well as the cutting/editing – at which such a project would ever be “completed”? Surely we might have continued it forever…

FIVE YEARS FOR DEVELOPING SUCH A “SMALL FILM” – WOULDN’T ONE THINK THIS TO BE LONG ENOUGH?

Of course, but I meant something different when I said “forever”, because we, and many of our viewers most possibly have already spent ages with it in a completely different manner…..Whenever Becker and Streich showed the just shot material to me, it always – besides me being surprised and unbelievingly shaking my head – presented a kind of recognition. Such abstract, tragicomic, poetic scenes I do know from my dreams, but never before did I see them in a film. Though I did know something like that. I know this only too well! And this – of course – is also frightening, to see such stuff suddenly in a “waken state”. And how to make a film from something like that? When dreaming, there is nobody watching either…

AFTER ALL, WAS IT EVER YOUR PLAN TO MAKE A FILM FROM THAT?

The shooting material presents the unfiltered joy to play, to improvise, just the pleasure of taking off with the “Santos”- figure. It is all simply about the moment and the energy that develops from the situation and the handling of the camera. And I worked on it in the same way – with an immense pleasure and interest in the project, the figure and these mad images. It was never about the final outcome nor dramatic structure, or all the other ballast we filmmakers usually carry around. Being a total no-budget-production, money, production, television, sponsorship etc. anyway did not matter here. And thus, suddenly there existed no constraints whatsoever. Everything is right and all is true! The seemingly chaotic material regarding theme and story was the hardest challenge, but at the same time the greatest possible inspiration, for indeed everything was possible here. And everything was different from all I know from other productions. And this even though I had produced a number of so-called “underground-productions”” before….But this film, if one could call it a “film” at all, really goes beyond the scope of any genre. Documentary, fiction, home-move, installation? I think it is a “Spiel”-Film (“Spiel-Film” is the German term for “play-film” which means feature film) – in its truest sense!

HOW DID YOU PROCEED WITH THE MONTAGE AND CONCEPTION OF THE SHOOTING MATERIAL?

Quite conventionally at the beginning as regards the editing. For instance, I afterwards tried to shape a kind of resolution. I developed some clip-like versions etc. But emotionally, all of this did not work out at all. Only after many months of work with the material and completely misled editing trials, it was clear that this must not be about the actual cutting or otherwise “polishing” or “cleaning” of the material. The scenes, their emergence and their resolution, their raw directness, had mostly to be kept in their complete length and remain comprehensible to the viewer. Only this way of living through the fact, that there is no script to determine the actor’s play, his environment and the camera, allows the viewer to really “take part”. Despite of all the artificiality which the theme itself naturally brings along, the viewer is “drawn in and right at it”.

YES, I DID FEEL EXACTLY LIKE THAT. THE FILM “SANTOS….” REALLY GETS UNDER ONE’S SKIN ON MANY LEVELS….

Also, because it always comes out something completely inconceivable between Peppi Streich’s operating camera and Ben Becker’s “Santos” creation. The “I” of the breathing, laughing, “Santos” calling camera pushes the actor into “heroic deeds” (which really no one needs). In the end, this is what creates the dreamlike, subjective, narrative perspective. And only in this way and with this perspective it was possible for me to work on the whole stuff as a deep “journey into the unconscious” which I originally had in mind.

WHEN TALKING ABOUT A “JOURNEY INTO THE UNCONSCIOUS”, SO THERE IS SOMETHING LIKE THE CLASSIC PATH OF THE PROTAGONIST?

Yes, of course. The whole production consists also “relatively-classic” of three acts. But I do not feel like talking about it here. It reminds me too much of film analysis – and this is exactly what hinders the comprehension of the project. When trying to understand it from that point, one looses the actual point of “Santos” and would not have felt anything. And will not feel anything at all.

STILL, LET’S TALK ABOUT THE PROTAGONIST ONE MORE TIME. WHICH FIGURE DID BEN BECKER HAVE IN MIND? DID YOU EVER DISCUSS THIS WITH EACH OTHER?

No, not at all. I must confess that we never talked about anything contents-related regarding “Santos…”. It is all just based on mutual confidence. Ben Becker, and Peppi Streich too, must have known from our long-standing friendship and also from the fact, that we had worked together a few times before (note: Sid&Nancy/Ex&Pop 1996, “Planet Alex” 2000) that “Santos…” would be in “good hands” with me. (he laughs)

BUT AGAIN, THIS STRANGE HERO FIGURE….

When working at the project, I always felt reminded of an abstract-modern adaptation of the figure of “Don Quichote” with a Sancho Panso behind the camera. But now, centuries later, only the reduction of his own symbols, suspicions and hopes is left over from the “hero”. “Santos” does not even have to try to fight against monster-(windmills). He is spooking through mythological waste, through metaphoric rubbish, through a faint abstraction from reality: the dwarf, the dead pig, the empty bus, who drives by like a ghost ship, or a telephone box taken out of its tags as reflection of total speechlessness. There is nothing left to be saved, because the fiction and the in there implied action had been lost long long before. Reality is what’s left – and in it, the repeated call of the last hero’s pose to his own mind. He himself, the hero of today, is the very saddest and most pitiful monster of all….