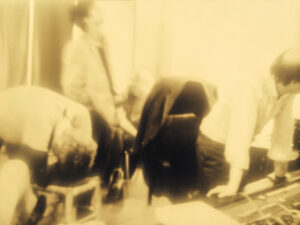 (24.10.19) With the “SHLIM-LINE Show” on the 24th of October 89 we (Johannes Beck & Uli M Schueppel, as studio guest Christoph Dreher / Die Haut) produced a show live in the West Berlin Radio100 in which we suddenly announced the fall of the Wall. The whole thing had triggered tremendous reactions – but perhaps not necessarily led to the real fall of the Wall 2 weeks later … or did it?