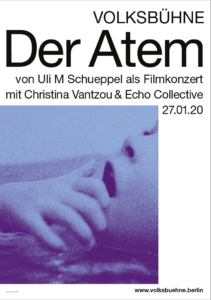 The film THE ATEM (The Breath) will be musically re-arranged and re-interpreted by the American composer Christina Vantzou and the renowned Belgian ensemble Echo Collective to the original sound as a modern symphony of the metropolis.

With this worldwide unique film-concert, the ‘Volksbühne’ presents DER ATEM by Uli M Schueppel for the first time back in Berlin, after its the completely sold-out premiere’s at the 69th Berlinale and its journey through the international festival circuit since.

The compositions by Christina Vantzou are dense, emphatically engaging and accompany the original score for the film. She’s previously collaborated with the music collective Echo Collective multiple times, in both the recording studio as well as international concert halls. The Echo Collective has already distanced itself from the classical establishment with its collaborations with Johan Johansson and Dustin O’Halloran, among others, in order to innovate with their orchestral music in contemporary genres.